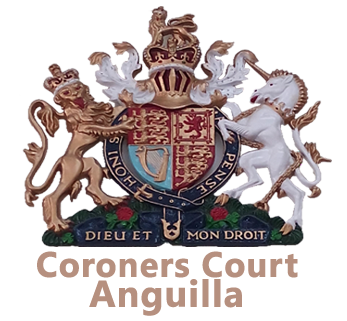 The Coroner provides the Registrar of Births, Deaths and Marriages with information about the cause of death so the death can be registered and a standard death certificate issued.

In matters where the coroner has not yet established the cause of death the Registry of Births, Deaths and Marriages can issue an interim death certificate. However such a certificate only confirms the fact that a death has occurred and does not specify the cause of death. As a result it may not be accepted for all official (financial and legal) purposes. It is therefore always best to confirm with whatever organization that you are dealing with as to whether they will accept an interim death certificate

If the body has to be repatriated out of Anguilla, your funeral director will assist you in filling out the necessary paperwork which will then be used along with the death certificate to accompany the body to its next destination. Although the medical cause of death may have been given by the pathologist (e.g. death by gunshot) where a Coroner’s inquest is necessary the inquest must continue to ascertain the circumstances under which the death occurred and to rule out foul play.

The body of a deceased person will not be released for repatriation neither will the said body be received by any authority abroad unless the necessary paper work ( document detailing the fact an cause of death) accompanies the said body.